History of the Edward Carpenter Forum 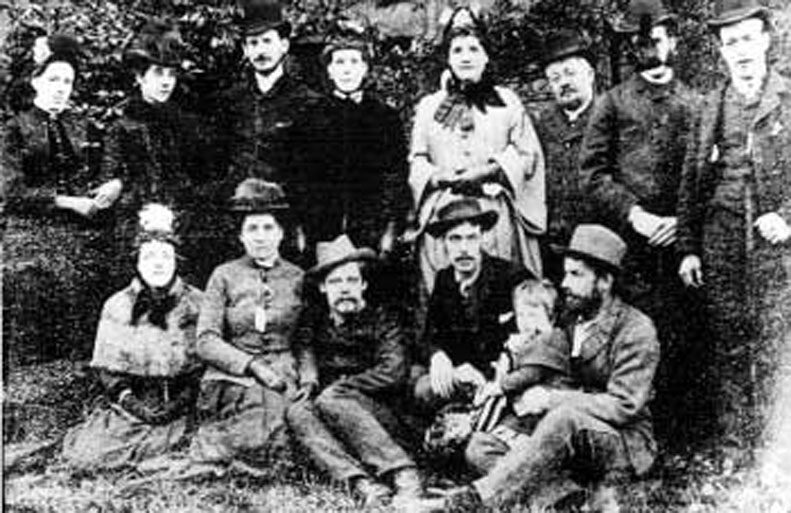 The Edward Carpenter Community (ECC) , a UK based network of support and friendship for gay men had taken Edward Carpenter's name back in 1985 when the community was first formed. Carpenter was an obvious inspiration for this fledgling, idealistic group seeking to create community between gay men, committed to vegetarianism, and wishing to explore alternative lifestyles in close connection to nature. However, over the years, and as ECC grew (it now numbers some 200 active members, with several 100 more on its mailing list), the sense of close connection to Carpenter faded, until he had become a vague figure, of little meaning to most.

The small group of Carpenter enthusiasts meeting together in the Spring of 2004, decided that a conference on Edward Carpenter should be organised for ECC, feeling that he was too fine and inspirational a figurehead to lie forgotten. Over the 12 months of research and preparation that followed, the network of contacts spread to Sheffield and its Library Archives, where the Carpenter Collection of manuscripts and letters is held, to Millthorpe, the small village close to Sheffield where Carpenter lived for nearly 40 years, making new friendships with the present owner of Carpenter House, with the landlords of Millthorpe pub, and a number of other local people. It was discovered that Sheila Rowbotham, eminent feminist historian and professor at Manchester University, was working on a major new biography of Carpenter. Further contacts were made with Carpenter researchers and enthusiasts within the United States.

The residential event itself, entitled Edward Carpenter; the man & his spirit, was held over a long weekend in March 2005. The 25 places had been snapped up within the first 48 hours of booking opening, with a long waiting list of others wishing to attend. The event took place in Derbyshire, just a few miles from Millthorpe. Workshops given looked at Carpenter's writings on Sex and the Body, on Spirituality, and on the Intermediate Sex. Sheila Rowbotham spoke on Carpenter's Socialism, and an address given by Joey Cain from San Francisco showed Carpenter's influence on Harry Hay and gay radicalism in the United States. In addition, Sheffield Archive welcomed the group to visit their collection, making available many fascinating Carpenter artefacts. An afternoon was spent at Millthorpe, visiting Carpenter House. And on the Saturday evening, the group celebrated and recalled Carpenter's life through readings, music and song.

The event was considered to be a great success - with the conclusion drawn that Edward Carpenter was more than simply a fascinating figure of historical interest; that he retained a contemporary relevance, his life and writing raising issues of continuing importance both to the gay community and to wider society.

A similar weekend event was held in May 2006, again in Derbyshire. ECC members attended from Europe and the US, as well as from the UK. The conference took as its theme; ‘Edward Carpenter and his friendships', Sheila Rowbotham speaking on Carpenter and women, and Joey Cain returning to talk on Carpenter's relationship with Walt Whitman and his links to the American Transcendentalists. The group was also joined by Sally Goldsmith and Rony Robinson, who live close to Millthorpe and have a long standing interest in Carpenter.

It was during this weekend in May 2006 that the proposal was made to create a new  Forum to bring people with an interest in Edward Carpenter together. It was proposed that this Forum should be of interest both to the academic researcher and to the general enthusiast, and that it should stretch beyond simply the gay community, to include a full range of interest groups and enquirers in the UK and abroad, reflecting in this the breadth and diversity of Carpenter's own involvements and friendship.

A small steering group has been working since then to realise the vision for an ‘Edward Carpenter Forum' - a vision that we trust would have pleased Edward Carpenter and have been close to his heart. In his autobiography he wrote the following;

"It thus became possible to realize in some degree a dream which I had had in mind for some time - that of making Millthorpe a rendezvous for all classes and conditions of society. I had by this time made acquaintances and friends among all the tribes and trades of manual workers, as well as among learned and warlike professions. Architects, railway clerks, engine-drivers, signalmen, naval and military officers, Cambridge and Oxford dons, students, advanced women, suffragettes, professors and provision-merchants, came into touch in my little house and garden; parsons and positivists, printers and authors, scythe smiths and surgeons, bank managers and quarrymen, met with each other. Young colliers from the neighboring mines put on the boxing-gloves with sprigs of aristocracy; learned professors sat down to table with farm-lads."

Edward Carpenter, My Days and Dreams